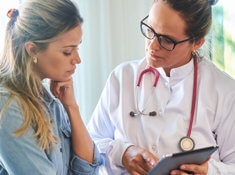 Ovarian cysts are a fairly common condition during ovulation. Let’s look at what are ovarian cysts, their causes, their symptoms, and natural remedies to deal with them.

What Are Ovarian Cysts?

A cyst is a general term used to describe a fluid-filled structure. Ovarian cysts are fluid-filled sacs that form in or on a woman’s ovaries.  The ovaries are two small, bean-shaped organs that are a part of the female reproductive system. Women have two ovaries – one on each side of the womb (uterus).

The ovaries have two main functions:

Ovarian cysts may affect both ovaries at the same time, or they may only affect one. Many women with ovarian cysts don’t have symptoms. Most ovarian cysts present little or no discomfort and are harmless.

Let’s look at the common types of ovarian cysts.

The condition known as Polycystic Ovarian Syndrome (PCOS) is characterized by the presence of multiple small cysts within both ovaries. PCOS is associated with a number of hormonal health issues and is the most common cause of infertility in women.

The most common type of ovarian cyst is a follicular cyst, which results from the growth of a follicle. A follicle is the normal fluid-filled sac that contains an egg. Follicular cysts form when the follicle grows larger than normal during the menstrual cycle and does not open to release the egg. Usually, follicular cysts resolve on their own over the course of days to months. Follicular cysts can contain blood (hemorrhagic cysts) from leakage of blood into the egg sac.

A Corpus luteum cyst is related to the menstrual cycle. The corpus luteum is an area of tissue within the ovary that occurs after an egg has been released from a follicle. If a pregnancy doesn’t occur, the corpus luteum usually breaks down and disappears. It may, however, fill with fluid or blood and persist as a cyst on the ovary. Usually, this cyst is found on only one side, produces no symptoms, and resolves spontaneously.

Endometriosis is a condition in which cells that normally grow inside as a lining of the uterus (womb), instead grow outside of the uterus in other locations. The ovary is a common site for endometriosis. When endometriosis involves the ovary, the area of endometrial tissue may grow and bleed over time, forming a blood-filled cyst. This cyst has red- or brown-colored contents called an endometrioma, sometimes referred to as a “chocolate cyst.”

Both benign and malignant tumors of the ovary may also be cystic. Occasionally, the tissues of the ovary develop abnormally to form other body tissues such as hair or teeth. Cysts with these abnormal tissues are really tumors called benign cystic teratomas or dermoid cysts.

Infections of the pelvic organs can involve the ovaries and Fallopian tubes. In severe cases, pus-filled cystic spaces may be present on, in, or around the ovary or tubes. These are known as tubo-ovarian abscesses.

The vast majority of ovarian cysts are non-cancerous (benign), although a small number are cancerous (malignant). Cancerous cysts are more common in women who have been through the menopause.

An ovarian cyst usually only causes symptoms if it splits (ruptures), is very large, or blocks the blood supply to the ovaries. In such cases, you may experience:

See your doctor if you have persistent symptoms of an ovarian cyst.

Severe symptoms of an ovarian cyst that require immediate medical attention include:

These symptoms can indicate a ruptured cyst or an ovarian torsion. In an ovarian torsion, ovary gets twisted around the tissues that support it. Both complications can have serious consequences if not treated early.

Who Can Get Affected By Ovarian Cysts?

Women Of All Ages

Ovarian cysts are common and affect women of all ages. The vast majority of ovarian cysts are a by-product of hormonal fluctuations that occur during a menstrual cycle. Although they may become problematic, they do not indicate a specific disease process. Most ovarian cysts are not cancerous (benign), and many disappear on their own without treatment over the course of several weeks.

Ovarian cysts are more common in women with regular periods. In fact, most women make at least one follicle or corpus luteum cyst every month. You may not be aware that you have a cyst unless there is a problem that causes the cyst to grow or if multiple cysts form. About 8% of premenopausal women develop large cysts that need treatment. Ovarian cysts most commonly occur during a woman’s childbearing years.

The following are potential risk factors for developing ovarian cysts:

A cyst on your ovary can be found during a pelvic exam. Depending on its size and whether it’s fluid filled, solid or mixed, your doctor is likely to recommend tests to determine the type of cyst and whether you need treatment. Possible tests for diagnosing ovarian cysts include:

Ovarian cysts are often detected during a pelvic exam. A pelvis ultrasound can allow the doctor to see the cyst with sound waves and help determine whether it is comprised of fluid, solid tissue, or a mixture of the two. In a transvaginal ultrasound, a doctor inserts a probe into the vagina to examine the uterus and ovaries. This examination allows the doctor to view the cyst in more detail.

Cysts can also be detected with other imaging methods, such as a computerized tomography (CT) scan or MRI (magnetic resonance imaging) scan.

If there aren’t any changes in your condition or if the cyst increases in size, your doctor will request additional tests to determine other causes of your symptoms.

During laparoscopy, a doctor will make small incisions and pass a thin scope (laparoscope) through the abdomen. The laparoscope will allow the doctor to identify the cyst and possibly remove or biopsy the cyst.

A cancer-antigen 125 (CA-125) blood test can help in identifying if a cyst is due to ovarian cancer. However, other conditions — including endometriosis and uterine fibroids — can also increase CA-125 levels, so this test is not specific for ovarian cancer. In some cases of ovarian cancer, levels of CA-125 are not elevated enough to be detected by a blood test.

The doctor may order a pregnancy test and assess hormone levels. Blood tests can also be performed to test for other hormonal imbalances that may cause PCOS.

Culdocentesis is performed by inserting a needle through the vaginal wall behind the uterine cervix. A fluid sample from the pelvis may be taken in order to rule out bleeding into the abdominal cavity.

Can Ovarian Cysts Be Prevented?

Treatment depends on your age, the type and size of your cyst, and your symptoms. Your doctor might suggest:

In many cases, you can wait and get yourself re-examined to see if the cyst goes away within a few months. This is typically an option — regardless of your age — if you have no symptoms and an ultrasound shows you have a simple, small, fluid-filled cyst.

Your doctor will likely recommend that you get follow-up pelvic ultrasounds at intervals to see if there’s a change in your cyst size.

Your doctor might suggest removing a cyst that is large, doesn’t look like a functional cyst, is growing, continues through two or three menstrual cycles, or causes pain.

Some cysts can be removed without removing the ovary (ovarian cystectomy.) In some cases, your doctor might suggest removing the affected ovary and leaving the other (non-affected) ovary intact (oophorectomy.)

If a cystic mass is cancerous, your doctor will likely refer you to a gynecologic cancer specialist. You might need to have your uterus, ovaries, and fallopian tubes removed (total hysterectomy) and possibly chemotherapy or radiation. Your doctor is also likely to recommend surgery when an ovarian cyst develops after menopause.

There are natural options that could be effective for managing functional ovarian cysts. These therapies should only be started after consulting your doctor. The key to getting rid of an ovarian cyst is to equalize your hormones and diminish factors that contribute to your cyst. Too much exposure to estrogen and xenoestrogen (estrogen imitators) can disrupt ovulation and lead to the formation of cysts.

Things To Avoid To Get Rid Of Ovarian Cyst

Heating foods in plastic or storing hot foods in plastic: There are xenoestrogen chemicals in this material that get released into your food when heated. Use glass containers instead.

Parabens in skin care products: They are found in many healthy foods at low levels. Your metabolic system makes them less strongly estrogenic. But applying parabens directly on your skin allows the body to absorb parabens while skipping the metabolic process.

Things To Do To Deal With Ovarian Cysts

Eat only organic meats and dairy: To avoid additives in these products that can raise estrogen levels and promote the growth of cysts.

Use natural detergents: Many laundry detergents contain xenoestrogen chemicals that can seep into your skin while you’re wearing your clothes.

For information on specific dosing, speak to a herbalist or a naturopath who can prescribe the right amount for you.

Do not use herbal remedies if you are pregnant or breastfeeding.

Use a castor oil pack: A castor oil pack is a cloth soaked in castor oil and placed on the skin to enhance reproductive circulation and promote the healing of bodily tissues and organs.

Note: Castor oil should not be consumed or applied to broken skin. Avoid using this if you are pregnant, breastfeeding or menstruating.

is a research-physician by profession. He believes that drugs, though necessary, are not the only way to prevent or cure a disease. A holistic approach is the best way to eliminate an ailment from your system. He, however, advises to try well-researched modalities that have passed the rigors of scientific testing.