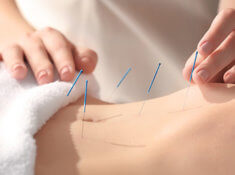 Traditional Chinese Medicine (TCM) offers a safe, natural, non-invasive alternative to Western medicine that shows considerable promise in helping women with Polycystic Ovarian Syndrome (PCOS). TCM has been around for hundreds of years. It is based on the Taoist theories of Yin and Yang, Qi (pronounced “chi”), and the five movements.  Although PCOS often goes unrecognised by modern doctors, Chinese medicine began recognising it as far back as the early 1200s. TCM considers PCOS to be an ovulation and genetic disorder that is directly related to ovarian insulin resistance.

Polycystic Ovarian Syndrome and the Liver

Stagnation of the liver is considered to be a leading cause of PCOS in Traditional Chinese Medicine. Liver stagnation often shows as excess heat in the meridians and channels of the body, or as blood stasis. In the case of blood stasis, the hair follicles are excessively stimulated resulting in unwanted, coarse body hair. When there is excessive heat present in the body channels or meridians, acne will be an issue.

Polycystic Ovarian Syndrome and the Kidneys

Practitioners of Traditional Chinese Medicine consider PCOS to be a deficiency in the kidneys. They associate issues such as irregular or absent menstruation and lack of ovulation with a kidney disease process. In TCM, the kidneys are the organs that are considered with genetic disorders. Therefore kidney dysfunction is believed to be the root cause of PCOS.

Polycystic Ovarian Syndrome and the Spleen

Traditional Chinese Medicine practitioners also look at deficiencies in the spleen in relation to PCOS. Insulin resistance relates directly to spleen deficiencies because the spleen is responsible for metabolising minerals and vitamins from the foods we eat. The spleen also carries body fluids. In women with PCOS, a TCM practitioner would consider the spleen to be dysfunctional.

In TCM, the spleen is believed to be the cause of weight gain. That may be why many women with PCOS struggle with their weight. When treating a woman with PCOS, the practitioner will focus on improving the function of the spleen, which will assist in regulating blood glucose levels and weight gain.  A properly functioning spleen will also stop the fluid accumulation (called Damp Accumulation in TCM) that occurs with ovarian cysts.

A TCM practitioner will create a unique treatment plan for each patient that utilises a combination of Chinese herbs and acupuncture to get the body’s organ systems functioning correctly.  Treatments will focus on dissolving the cysts, regulating the menstrual and ovulation cycles, improving digestion, and supporting a woman’s efforts to conceive. It may take anywhere from three to six months to see significant improvement. Once ovulation and menstruation cycles are regulated, monthly acupuncture treatments may be recommended until conception is achieved.

The following lifestyle changes may also be recommended:

One particular study from the Gothenburg University in Sweden showed that electro-acupuncture could be very helpful in getting a woman with PCOS to ovulate. The study included three separate groups of women with PCOS. The first group of participants in the study received the electro-acupuncture treatments regularly over the course of four months. The second group was given instructions to exercise at least three times a week, but no acupuncture treatments. A third group acted as a control group.

At the end of the four-month study, menstrual cycles were more regular in the group who received the acupuncture treatments. Their testosterone levels were much lower, and many were experiencing more regular ovulation. Unfortunately, the most severe cases did not see a significant improvement. However, it is also interesting to note that the women in the second group showed more improvement than those in the control group, but not as much as those who received the acupuncture treatments.

Western medicine addresses PCOS with a combination of pharmaceuticals. Unfortunately, the first line of treatment that is usually recommended is oral contraceptives. For a woman who is trying to conceive, oral contraceptives are obviously not a good option. And, although they may provide some relief of the symptoms of PCOS, they do nothing to treat the underlying cause of the condition. They can also lead to weight gain, which could further complicate the condition. Insulin-sensitizing agents are sometimes prescribed as well, but they can cause digestive issues and other undesirable side effects.

In severe cases, laparoscopic surgery, called Laparoscopic Ovarian Drilling, may be also be recommended to trigger ovulation. This surgery is usually recommended as a last resort when weight loss and fertility drugs have proven ineffective. As with any surgery, there is a risk of postoperative complications, including infection and internal scarring. Although this procedure can be successful in regulating menstruation for a time, the effects may eventually wear off, and cycles will become irregular again.

Polycystic Ovarian Syndrome is one of the most common hormonal disorders affecting young women of reproductive age. Although it is a complex disorder, making changes to your diet and lifestyle and incorporating Chinese herbs and acupuncture treatments can bring significant improvement without the use of harmful pharmaceutical drugs or invasive surgery.

Is PCOS Genetic & Can You Control Its Onset?
Q: Is Clomid Only Given To Those Who Have PCOS?
Spironolactone For PCOS: Benefits And Side Effects
Why Is Green Tea So Good For Women With PCOS?

As an experienced content creator, Donna has covered health and wellness topics for numerous publications. She is a former writer for an alternative medicine clinic and can often be found researching the latest industry approaches and trends and sharing the insight she’s learned while on her own wellness journey.